This mystery is considered solved.

Similarly to claims of an unlockable Luigi in Super Mario 64, rumors surfaced around unlocking Waluigi as a playable character in Super Mario 64 DS. As the other three plumbers—Mario, Luigi, and Wario—were unlockable, Waluigi's absence seemed suspicious to many fans.

While not nearly as popular as "L is real", these rumors were still fairly popular for a while, thanks to fake leaks and doctored images. It is unknown whether Waluigi was ever actually planned for Super Mario 64 DS.

Beta screenshots of Super Mario 64 DS show that a purple rabbit existed in early versions, but was removed for the final game. Some fans assumed that catching this bunny would give the player a key to Waluigi's door, unlocking him as a playable character.

There is no such rabbit color in the final game, and it is not certain what the purple rabbit would have done. One of the beta purple rabbits can be found on page 30 of the official Super Mario 64 DS Instruction Booklet. The placement of the image implies that it would have unlocked minigames like other rabbits.

One rumor claimed that Super Mario 64 DS would unlock Waluigi upon 100% completion. The player would need to collect every Power Star and unlock every minigame. The rumor then claims that by defeating Bowser and reaching the top of Princess Peach's Castle (where Yoshi could be found in the original Super Mario 64), Waluigi could be found; talking to him would unlock him.

This was quickly debunked, as Waluigi does not appear on top of the castle after meeting these conditions.

This subject is considered a hoax. 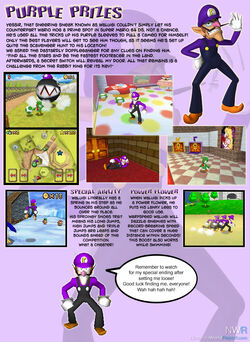 In 2005, deviantART user King-Bowser-Koopa posted an image scan of an article titled "Purple Prizes", and named the submission "Waluigi in Super Mario 64 DS." The article suggests that Waluigi could be unlocked in the game, and provides hints toward unlocking him, ultimately sending the player on a wild goose chase.

Find all the stars and be the fastest footracer in the land. Afterwards, a secret switch will reveal my door. All that remains is a challenge from the Rabbit King for its key!

Many sources claim that this article was featured on IGN or an issue of Nintendo Power.

The article featured a custom 3D model of Waluigi placed in various game locations such as Bob-omb Battlefield, Cool, Cool Mountain, and the castle grounds. According to this article, Waluigi had springy jumps that were "leaps ahead of the competition," and his Power Flower transformation would be the fast-moving Warpspeed Waluigi. Players interpreted the article's vague hints in various ways to try to unlock Waluigi, to no avail.

Two days after posting the image, King-Bowser-Koopa revealed that the image was an April Fools' joke. However, it seems that the article was still circulated as legitimate afterwards.

In the image of Princess Peach's Castle on the file select screen, there is a dark gray "box" that doesn't appear in the in-game model of the Castle Grounds. A rumor emerged that the player could reveal and break this perceived box, leading to a fake sequence of events that would purportedly unlock Waluigi and remove the box from the file select screen image.

The so-called "box" is also present in an early build of the game, then called Super Mario 64 × 4, that was used at E3 2004. It seems like the file select image was not updated after its removal. Another scrapped element from this build is a floating island above the Castle Grounds.

The purpose behind the "box" is unknown. It may have been an alcove in the outside of the castle, perhaps containing a rabbit or cannon, that was added and removed in development. Other speculation claims that it is the preexisting cannon before being properly initialized, although it's questionable why it would appear to the right side of the map rather than the center; this is also less likely when considering the E3 footage.

Community content is available under CC-BY-SA unless otherwise noted.
Advertisement